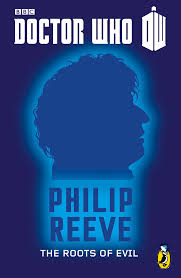 The fourth instalment in a sensational series of stories celebrating the 50th anniversary of Doctor Who is written by Philip Reeve, award-winning author of the Mortal Engines, Here Lies Arthur and Goblins.

On 23rd January Artemis Fowl author Eoin Colfer launched the series with his story based on the First Doctor, A Big Hand for the Doctor, followed by Michael Scott’s Second Doctor adventure, The Nameless City, and Marcus Sedgwick’s Third Doctor story The Spear of Destiny. The authors of the subsequent eshorts will continue to be unveiled on the BBC Worldwide Doctor Who Facebook page on the first Tuesday of every month throughout the year. A promotional video featuring the author will be released on the 11th of each month on the BBC Worldwide Doctor Who YouTube channel.

Philip Reeve commented: ‘I started watching Doctor Who during the Tom Baker era and so to me he is the ‘real’ Doctor, and it was a huge honour to be asked to write about him. I tried to imagine myself to a Saturday teatime, circa 1979: a new Doctor Who story was about to begin – where would the TARDIS materialise and what would be waiting for it?’

When the Fourth Doctor takes Leela to visit an immense tree space station known as the Heligan Structure, little do they know that the tree has been asleep for centuries, dreaming of vengeance against a man in a blue box… As the tree awakes, the Time Lord and his companion soon discover why they are such unwelcome guests.

Philip Reeve was born in Brighton and worked in a book shop for many years before becoming a full-time illustrator and then turning to writing. His first novel, Mortal Engines, won the Nestlé Smarties Gold Award (2002), the Blue Peter Book of the Year Award, and was shortlisted for both the Branford Boase Award and the Whitbread Children's Book Award. He has since won many more awards and accolades for his works including the Guardian Children’s Fiction Prize in 2006 and the Los Angeles Times Book Award for A Darkling Plain and the 2008 CILIP Carnegie Medal for Here Lies Arthur. His most recent titles are GOBLINS (2012) which was shortlisted for the Roald Dahl Funny Prize and its sequel GOBLINS VS DWARVES (2013). He lives in Dartmoor, England with his wife and son, Sam. For further information and to explore the author’s own curious world visit www.philip-reeve.com.

Email ThisBlogThis!Share to TwitterShare to FacebookShare to Pinterest
Labels: Doctor Who, Doctor Who 50th Anniversary, Philip Reeve, The Roots of Evil