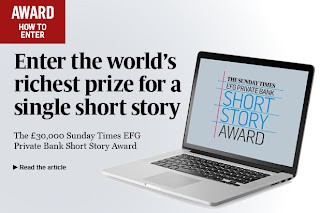 The deadline for submissions is 27th September 2013. Please see below for details on how to enter, or, for the first time, you can also visit the dedicated website for the Award: www.thesundaytimes.co.uk/stefg.

A truly international , the Sunday Times EFG Private Bank Short Story Award is open to any novelist or short story writer from around the world who is published in the UK. Last year's winner was Junot Diaz for his story 'Miss Lora'.

The judges are looking for an outstanding English-language story of 6,000 words or under from a fiction author from anywhere in the world who has been published in the UK or Ireland. The winner will receive £30,000, and the five shortlisted writers will each receive £1,000 as well as having their work published online. A longlist will be announced in February 2014. The winner will be announced in April 2014.

The world’s richest award for a single short story

The Sunday Times EFG Private Bank Short Story Award honours the finest writers of short stories across the world. Worth £30,000 to the winning author, and £1,000 to each of its five annual shortlisted writers, it is open to anyone with a previous record of publication in creative writing in the UK or Ireland, subject to our terms and conditions.

The prize follows the success in The Sunday Times Magazine of a regular story slot which attracted some of the most talented names in short-story writing. The Award now stands alone and proudly celebrates the very best work in the genre.

The entry period for the 2014 Award is now open, and will close on Friday 27 thSeptember 2013. To enter, please read the terms and conditions carefully and and complete the entry form, both below. All completed entry forms should be sent to sundaytimesEFG@booktrust.org.uk. For the first time, more information and news about the prize, along with terms and conditions of entry and entry forms can be found at the dedicated website: www.thesundaytimes.co.uk/stefg

The winner of next year's prize will be announced in April 2014.