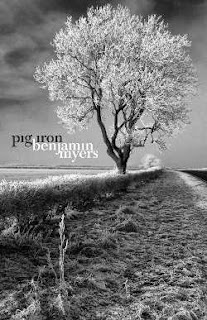 Benjamin Myers  was named winner of the inaugural Gordon Burn Prize for his book Pig Iron (Bluemoose Books) at a special event at Durham Book Festival last night Saturday 19th October. Durham-born Myers will receive a £5,000 award and the opportunity to undertake a three-month writing retreat at Burn’s cottage in Berwickshire.
There was strong competition for the award this year, with an impressive shortlist of unusual, challenging work. However, the judging panel, comprising novelist David Peace, journalist Deborah Orr, and broadcaster and author Mark Lawson, picked Myers as the author who best represented the fearless, interrogative spirit of Burn’s writing.
Judge Deborah Orr said: “In Pig Iron, Benjamin Myers’s most recent novel, I think we have alighted on a work that captures the spirit of the Gordon Burn Prize perfectly. Which is good. This being the inaugural award, it was very important for us to start as we mean to go on.

In Pig Iron, Myers’ protagonist, the traveller, John-John, tries to escape the brutal legacy of his bare-knuckle fighting father by abandoning the travelling way of life. His new job as an ice cream man and settled life on the edge of a Northern town are meant to offer him freedom. Instead he finds prejudice, parole officers and local gangs.

The Gordon Burn Prize, run in partnership by New Writing North, Faber and Faber, and the Gordon Burn Trust, was conceived to pay tribute to the literary legacy of the late author. An incisive, undaunted writer, Newcastle-born Burn was a literary polymath, writing widely and well on a range of subjects from George Best to Peter Sutcliffe. The Gordon Burn Prize seeks to recognise writers whose work follows in his footsteps: authors whose novels enter history to interrogate the past, and non-fiction writers brave enough to recast characters to create a new and vivid reality.