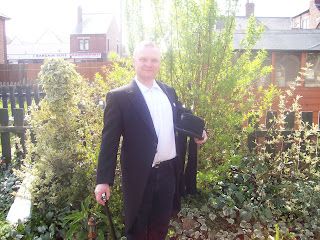 An odd month as I had a gig I’m in no hurry to repeat … After several months in hospital, hospice and nursing home a friend died. They and their partner weren’t religious in the slightest and as I am used to public speaking, I was asked to conduct the funeral service. For three years I’d been Poet-in-Residence for a local cemetery’s Friends Group (writing poems for the meetings and creating poetry trails through the grounds) and have been to funerals of variable quality. At my grandfather’s, for instance, the vicar got his name wrong! So I immediately had in mind the sort of service I thought Carol would have liked. She had been a fan of Oscar Wilde so my first thought was to read The Selfish Giant, but the most important thing to remember about a funeral service (especially at Peterborough crematorium, one of the busiest in the country) is that you have to keep to the time. Over-run and the next family after you won’t understand, they’ll have their own pressures so won’t appreciate any sloppiness on your part. Instead of the fairy tale I went with a poem by Wilde and (as she was a big fan of history) a quote from Marcus Aurelius about living a good life and never mind what the gods think. I collected stories from friends and her work colleagues and wove together a suitable eulogy. Before the start of the service the undertaker took me through the controls, how to start the music, how to close the curtains etc. and we had lift off. Fair to say it wasn’t your average funeral service. The coffin was brought in to 'The Post-Horn Gallop', followed by the theme to 'Blackadder'. After I had said my pieces and thanked friends, nursing home staff, undertakers, etc. we said our farewells to 'I’m On Fire' by Kasabian. Afterwards, people thanked me (including one of the crematorium staff, who also asked if they could contact me if they needed my services again) but as I said, I’m in no hurry to do another.


Later in the month I attended an open mic night at the Stamford Arts Centre in Lincolnshire. Good night, only been going a couple of months and embracing all styles and abilities, as a good open mic’ should. As I was leaving this woman shouted at me “You were fantastic. We really, really enjoyed it” which I’d have appreciated more if she’d been at the poetry session and hadn’t just been mistaking me for an actor in a play she’d been to see. Still, I’ll accept any good review, even if it was intended for someone else.

Also in the month I’d been asked if I could read some poetry at an event and it was convenient and there was going to be cake, so I agreed. Nice thing was at the end the organiser said they could pay me. Hadn’t been expecting it so it was a bonus.

Last month I mentioned a couple of pieces of bad news from the small-press scene, so this month I thought I’d finish with a more positive note. Poetry Cornwall is a great little magazine that I’d recommend you perhaps buy a sample copy with a view to either subscribing to or submitting work to. Professionally produced it takes poetry in English, dialect and Cornish from around the world, includes features on editors and a brief review section. For full details go to the website at http://www.poetrycornwall.freeservers.com/”
Peter Cox
Posted by Book aPoet at 16:31