ARTEMIS FOWL AND THE LAST GUARDIAN is out NOW - the final instalment!

As fans of the Artemis Fowl series, we recommend this final instalment of the exciting series and wonder what Eoin Colfer will create next ... 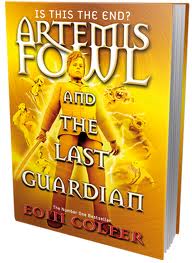 IS THIS ARMAGEDDON FOR ARTEMIS FOWL?

If she succeeds, the spirits of long-dead fairy warriors will rise from the earth, inhabit the nearest available bodies and wreak mass destruction. But what happens if those nearest bodies include crows, or deer, or badgers - or two curious little boys by the names of Myles and Beckett Fowl?

Yes, it's true. Criminal mastermind Artemis Fowl's four-year-old brothers could be involved in destroying the human race. Can Artemis and Captain Holly Short of the Lower Elements Police stop Opal and prevent the end of the world?

On the 9th July 2012, Eoin Colfer took part in a Puffin Virtually Live webcast broadcast from the library in Fowl Manor.  He read from 'ARTEMIS FOWL AND THE LAST GUARDIAN' for the first time and answered viewers' questions. You can now watch the video on demand at www.puffinvirtuallylive.co.uk

To find out more about Eoin Colfer and his work check out www.eoincolfer.com!
Posted by Book aPoet at 10:49