Hubbard's Half Hour on Resonance Radio

The radio feature is a reading from and discussing the background to 'Girl in White', Sue Hubbard's new novel on the artist Paula Modersohn Becker : 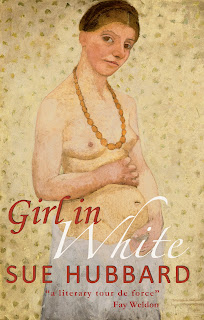 
“In art,” the Expressionist painter Paula Modersohn-Becker (1876-1907) declared, “one is usually totally alone with oneself.” For a female artist in the early 20th century, such aloneness was radical in itself. It is Modersohn-Becker’s radical alones, as artistic pioneer and independent woman, which particularly fascinates Sue Hubbard in her new novel, a fictionalised account of the artist’s life.

In Girl in White, Modersohn-Becker’s life is portrayed as a series of struggles to assert independence, or “aloneness”, freeing herself from the conventions of German art, from financial dependence on men, and from the binds of family life. In all these struggles, she is only half-successful, never satisfied that her paintings quite attain her aesthetic vision.


During her most productive period – her last stay in Pars – she is destitute, and repeatedly compelled to appeal for financial aid from others, including her estranged husband. Ultimately, she returns from Paris to her husband in Germany, forced by history into this “compromise”. As one character puts it, “I don’t believe the world is yet ready for a woman artist to make it alone.”

Yet is it precisely this “aloneness” that is a perquisite for art. “Art without pain, without sacrifice, without loneliness,"  says Rainer Maria Rilke, one of Modersohn-Becker’s lovers, is “impossible”. It is the impossibility of Modersohn-Becker’s position – torn between the loneliness of art and enforced selflessness of her role as a wife – that destroys her. After returning to her husband, she falls pregnant, and dies shortly after childbirth.

The power of Hubbard’s novel for contemporary readers is in its distillation of dilemmas which, of course, are still pressing for women today. As Rilke wrote of Modersohn-Becker in his great poem “Requiem”, it is her spirit which, of all his dead friends, most seems to haunt the future.


Jonathan Taylor is the author of the novel ‘Entertaining Strangers’ (Salt) and the memoir ‘Take Me Home: Parkinson’s, My Father, Myself (Granta)

Thank you to Sue Hubbard for sending us this information.
Posted by Book aPoet at 09:53