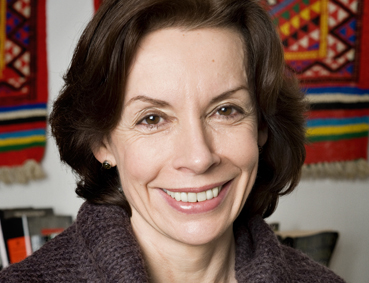 "Gods and Warriors" is the first book in an epic new five-part Bronze Age series for adventure-loving girls and boys aged 9+, here Michelle Paver tells us about her brand new series ...

"The story of Hylas and Pirra takes place three and a half thousand years ago, in what we now call the Bronze Age. As you may have gathered, it happens in the land we call Ancient Greece. However, the Greece of the Bronze Age was very different from the Ancient Greece of marble temples and classical sculpture with which you may be familiar. The Bronze Age was long before that. It was even before the Greeks ranged their gods and goddesses into an orderly pantheon of Zeus, Hera, Hades and all the others.

We don’t know as much about Bronze Age Greece as we do about what came afterwards, because its people left so few written records. However, we know something about the astonishing cultures which flourished at that time, and which we call the Mycenaeans and the Minoans. Theirs is the world of Gods and Warriors.

Here I need to say a quick word about the place names in the story. What Hylas calls Akea (or Achaea, as it’s usually spelled) is the ancient name for mainland Greece; and Lykonia is my name for present-day Lakonia, in south-west Greece; but I’ve kept the name Mycenae unaltered, as it’s so well-known. Concerning Pirra’s people, I’ve adopted the name ‘Keftian’ for the great Cretan civilization which we call Minoan. However it’s one of the mysteries of the ancient world that we don’t actually know what the people of that civilization called themselves; depending on which book you read, they may have called themselves Keftians, or that may just have been a name given to them by the Ancient Egyptians. As for the Egyptians themselves, although the name ‘Egyptian’ comes from the name given to them by the Greeks, I’ve used it in the story because, like Mycenae, it felt too awkward and artificial to change it.

In creating the world of Hylas and Pirra, I’ve studied the archaeology of the Aegean Bronze Age, particularly its tombs and strongholds, artefacts and weapons. But to get an idea of how people thought and what they believed, I’ve also drawn on the beliefs of more recent peoples who still live in traditional ways, just as I did when I wrote about the Stone Age in Chronicles of Ancient Darkness. And even though people in Hylas’ time lived mostly by farming or fishing, rather than by hunting and gathering, as they did in the Stone Age, I’ve no doubt that many of the skills and beliefs of those earlier hunter-gatherers would have lingered on into the Bronze Age, particularly among the poorer and more isolated people, such as Hylas himself.

Concerning the geographical setting for the story, many people believe that Bronze Age Greece was a land of scattered chieftaincies separated by great mountain ranges and forests. It’s also thought to have been wetter and greener than it is today, with far more wild animals both on land and in the Sea. In creating the Island of the Goddess, I didn’t have a specific Greek island in mind, but based it on my sojourns over the decades on the islands of Ithaka, Kephalonia and Alonissos. More recently, and to gain inspiration for Lykonia, I visited Lakonia, including the Acropolis at Sparta, the Eurotas river and the deserted and immensely evocative ruins of the nearby Menelaion. To get a feel for Hylas’ mountain home, I explored the Langada Gorge that winds through the Taÿgetos Mountains, and stayed for several days at the top of the Langada Pass. Wild boar still haunt the forests there; one morning, I had a slightly unnerving encounter with five piglets and their watchful mother.

To experience the caves in which Hylas and Pirra hide out, I explored the extensive, watery cave system of Vlychada, on the Bay of Diros in south-west Lakonia, as well as its small but highly informative local museum. There I learnt of the dreadful fate of some of the cave’s earlier inhabitants, one of whose calcified remains sparked the idea for Pirra’s encounter with the Vanished Ones. To get a feel for Keftiu, I visited Crete, where the ruins at Knossos and Phaestos, as well as the museums of Iraklion and Archanes, provided much inspiration for Pirra’s homeland.

Spirit is, of course, one of the most important characters in the story, and to get to know him better I swam with socialized dolphins in Florida, where one of them kindly gave me a fin-ride, as Spirit does for Hylas and Pirra. I then travelled to the mid-Atlantic islands of the Azores, where I spent days observing wild dolphins of different species: Striped, Atlantic Spotted, Common, Risso’s and Spirit’s own kind, the Bottlenose. It was only when I saw wild dolphins in their natural habitat that I truly appreciated the mysterious synchronicity of their swimming. Snorkelling with them gave me a powerful sense of their otherworldliness, which made it easy to imagine how Hylas feels when he sees the dolphins swimming in the phosphorescence which he calls ‘the blue fire’. Above all, watching those wild dolphins gave me an imaginative insight into how Spirit experiences life in his deep blue world."

Born in Malawi in 1960 to a Belgian mother and a father who ran the tiny 'Nyasaland Times', Michelle Paver moved to the UK when she was three. She was brought up in Wimbledon and, following a Biochemistry Degree from Oxford, she became a partner in a big City law firm. She gave up the City to follow her long-held dream of becoming a writer. She is the author of the brilliantly successful children's series, "Chronicles of Ancient Darkness". "Gods and Warriors" is the first book in the story of Hylas and Pirra, which tells of their adventures in Akea and beyond, and of their fight to vanquish the Crows. The next book in the series will be published in autumn 2013. Visit Michelle’s hugely popular website, THE CLAN for exclusive features: http://jointheclan.com/. Michelle Paver is the winner of the 2010 Guardian Children's Fiction Prize - for her sixth and last book in the "Chronicles of Ancient Darkness" series and her books have sold over 2.5 million copies worldwide and are published in over 35 languages.

In the turbulent world of the Mediterranean Bronze Age, a boy and a girl battle for survival with the help of three animal allies…

Set long before the Greek Myths and before the Trojan War, Gods and Warriors tells the tale of a young boy called Hylas and a young girl called Pirra who get thrown into battle. Hylas is a lowly 12-year-old goatherd, thief and outsider. His story starts in the mountains of Greece where in a single night, his world is overturned – his camp is attacked, his dog is dead and his sister is missing - setting Hylas on a journey that will take him far from the mountains and across the seas as far afield as Crete and Egypt.

Through Hylas’ adventures bonds will be formed and allies will be made with animals - including a lion, a falcon and a dolphin – against a backdrop of chariots, ocean-going ships, slaves, warriors, myths and magic. Can Hylas and Pirra defeat tyranny and withstand the elemental powers of the gods of land and sea?

Highly recommended for readers aged 9+
Posted by Book aPoet at 11:32