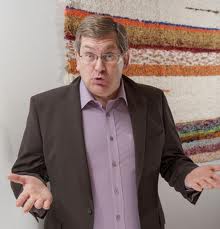 
Milton Keynes Poet Laureate, Mark Niel has reached the final of a prestigious comedy competition. The NATYS: New Act of The Year is New Variety’s comedy showcase and awards for emerging talent who are serious about their craft and have the ambition to breakthrough into the live entertainment profession.

Described as "the most important show of the year for new comedy and variety talent" by The Stage, Mark made it through the nerve-wracking audition process to win one of sixteen coveted places out of a field of nearly two hundred applicants. Each act has only five minutes to make an impact on the judges and audience.

Mark said, “I’m delighted to have reached the final and I’m looking forward to performing in a respected competition with such a long and distinguished history”.

The NATYS began in 1983 on the CAST New Variety Circuit and ran for over 20 years at the Hackney Empire, becoming the celebrated industry showcase and key diary event for reviewers (Evening Standard, Time Out, Metro, Guardian Guide, and Chortle), agents, scouts and bookers.

“I feel very humbled to have made trod the same path as many of my comedy heroes. I believe that poems can be entertainment as well as art and I’m excited to represent Poetry on a big stage”.