FOYLE YOUNG POETS OF THE YEAR AWARD IS NOW OPEN 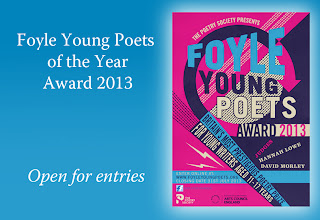 Since it began 16 years ago the Award has kick-started the career of some of today's most exciting new voices. The phrase 'Former Foyle Young Poet', is now commonly found in professional biographies as alumni continue to make their mark on the wider literary world, their names appearing on bookshelves and at festivals the world over. The Poetry online Alumni Library  celebrates the successes of these exciting new voices.
http://www.poetrysociety.org.uk/content/youngpeople/ymlibrary

"This journey has been transforming and surreal. I would encourage all young writers to submit to this competition while the chance still remains."
Sara Henry, former Foyle Young Poet of the Year

Find out more at www.foyleyoungpoets.org