Featured Poem for May 2013 - Heart-Stopper by Richard Tyrone Jones

The ward’s tourniquets sport smiling cartoon Draculas;
All night, old men’s alarms have burst my dreams.
A med. student, red-nailed, raven-haired, immaculate,
asks so many questions it’s like she wants to date me.
She reads my wrist with slow, sharp-clawed precision
then joins the rounds – if I were well I’d like to rip her skirt off.
And at that thought, dark lightning tears my chest.
Sweat-drenched, I paw for oxygen, panic button,
it’s like my plug’s been pulled – breath fades so fast
I whimper ‘Mum, I love you’ with my last….
But the heart monitor nurse bursts in, whips back the curtain,
shouts out ‘He’s had a gap!’ The rest
dash back, ask the student: ‘can you get his shirt off?’
She panics ‘How?’ They just cut it, like on television.
I’m flailing, failing, they’re about to defibrillate me
– ‘Clear’ – But two have already stabbed in canulas;
adrenalin stakes slow paths through my bloodstream.
I’m alive, but empty, trembling. ‘Vaso-vascular’.


© Richard Tyrone Jones 2013
Please do not use without the poet’s permission. 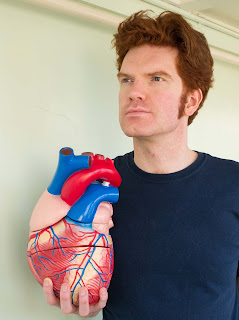 The spoken word sitcom version of 'Richard Tyrone Jones's Big Heart' will be broadcast on Radio 4 this Autumn ... Keep an ear out!