I’ve always loved ghost stories, tales of the supernatural – the weird and the mysterious.  I grew up in a haunted house, so maybe that’s why. Or perhaps I’m just like that…
Choosing a mere five supernatural reads is tricky. More than tricky – it’s almost impossible. But I’ll try.  I have too many favourites to really describe this as a ‘top 5’, but they are certainly 5 of the best.  I’ve tried to think of stories that aren’t obvious contenders – for example, I love Susan Hill’s The Woman in Black, but I suspect that would make it into most Top 5 lists. So I’ve deliberately left it out!  I’ve also veered towards the more traditional and ‘classic’ works, which sadly excluded some of my favourite writers of the supernatural like Stephen Gallagher – as a bonus 6th choice, read anything of his!
In no particular order then:

A real classic, from 1897, and – unlike Frankenstein – written by an experienced author with flair and talent as well as imagination.  A novel that deserves its reputation, if you think you know the story and reading it won’t add anything to your understanding of vampires – or chills – then think again.  Strange to think that when he died, Stoker’s obituaries didn’t even mention Dracula. Now, despite his other achievements, he’s remembered for nothing else…

Anything by M.R. James

The absolute master of the disquieting ghost story.  All his tales are beautifully written, relying on atmosphere and character rather than shock and gore.  The best-known of his works are as you’d expect the most impressive – including Casting the Runes, and “Oh Whistle and I’ll Come to You, My Lad”. But I particularly like The Haunted Dolls’ House (first published in 1923).

Something Wicked This Way Comes

Bradbury at his best and most unsettling… First published in 1962, this is a story about two young boys, just into their teens, coming to terms with the stark realities of the world and with encroaching adulthood. But the backdrop against which they reach their understanding – a bizarre, dark funfair – combines fantasy and horror in a parable about the conflicting natures of good and evil in us. It’s an obvious, and impressive, influence on so many other writers – most notably Stephen King.

An unusual choice perhaps, especially given that Martin is now most famous for his Song of Ice and Fire series (filmed as Game of Thrones).  But this earlier work (from 1982) is for me this his best novel.  Set against the landscape of the Mississippi and taking place largely on gambling river boats, it’s a vampire tale that is both traditional and avant-garde in its treatment of the creatures. It reinvented vampires long before that became a popular device…

The Hound of the Baskervilles

The perfect combination of detective fiction and ghost story – perfect!  There are terrific set pieces of both genre – Sherlock Holmes’s assessment of a mysterious note assembled from newspaper clipping, and the attack of the hound.  The atmospheric moors and mire and an apparently haunted house ramp up the atmosphere of supernatural threat.  Of course, we know there must be a rational explanation, and the juxtaposition of the rational and the unexplained forms the central premise of the book.  First published as a serial in 1901-1902, this is another novel that lives up to the hype.  And again if you know the story but haven’t actually read the book, then you’ve missed a treat.
*** 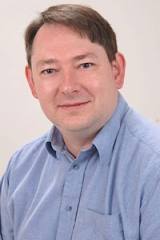 Although he is now best known as a children's writer, Justin Richards is also the author of dozens of genre and sf novels, as well as non-fiction books, audio scripts, television and a stage play. He has edited books of short stories, been a technical writer, and worked as odd-job man in a hotel for postal workers.


Justin is the author of the popular children's series The Invisible Detective, and also the series Time Runners. For younger children, Justin writes the Agent Alfie series - about a boy who finds himself at a school for the children of spies and secret agents. Though Alfie's own dad is a postman.

Justin's novel for older children - The Death Collector - was first published in 2006, followed by The Chaos Code in 2007 and The Parliament of Blood in 2008, with The Chamber of Shadows following in 2010. His series The School of Night also started
in Autumn 2010.

He has co-written several action thrillers for older children with the acknowledged master of the genre Jack Higgins. Justin acts as Creative Consultant to BBC Books' range of Doctor Who titles, advising on the commissioning and editing of all the company's Doctor Who titles as well as writing quite a few himself.

***
Justin's new book 'The Wolfstone Curse' is out now, published by Templar Publishing and available from all good bookshops and online. Here is a review by one of our teen reviewers, Sophie-May Hopkins: 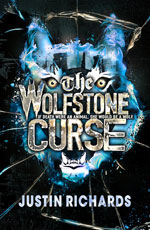 'The Wolfstone Curse'
By Justin Richards
Published by Templar Publishing
RRP £6.99 (paperback)
ISBN 9781848775510
Reviewed by Sophie-May Hopkins, aged 15
This is a chilling story of werewolves and other supernatural happenings that lie behind this tale of the dark secret woven into the village of Wolfstone.
Peter thinks his holiday will be dull and boring. How very wrong he is ... a trip to Wolfstone, an old town in the middle of nowhere, is not Peter's idea of fun. Peter's dad is busy down at the "dig" and Peter just wants to go home. When Peter meets Carys and takes an interest into the myths and legends surrounding Wolfstone his holiday starts to get more interesting ... very, very interesting ...
The Wolfstone Curse is a book suitable for all teenagers. The characters are interesting and bring the book to life. The book does not contain a dull moment and this book is good for people who like mystery and werewolves.
**You can also download the free Wolfstone app for your smart phone. Active the app, then point and scan the cover to reveal hidden content!**
Highly recommended for teen readers +

***
A huge thank you from Book a Poet to Justin Richards for his guest blog and to Sophie-May Hopkins for her review!