Each week there will be a different special guest head-liner poet and on Thursday 13th September the head-liner is the awe-inspiring ... Mike Garry! 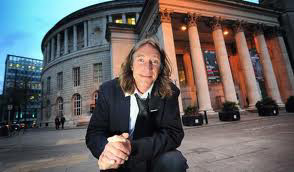 Author of recent BBC commission poetry collection 'God Is A Manc', Bang Said The Gun: Manchester are proud to be kicking off the start of their second season of dates with the true poet laureate of the north.

with hosts Dominic Berry, Kieren King, Rod Tame, Dave Viney and Benny-jo Zahl.
If underpants, sex, gravy and Keith Moon giving the Queen Mother drumming lessons are your thing, then this could be the verbal romp you’ve been waiting for ...

Bang Said The Gun in London is considered one of the best poetry nights in the country and has recently been reaching over 4 million viewers on Channel 4’s Random Acts.

Repeating this winning formula, its Manchester’s first weekly poetry night celebrating the best in local and national poets as well as offering audience members the chance to compete ... for the coveted **Golden Gun prize** in the Top Banana Open Mic!