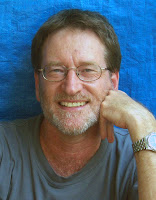 We've been lucky enough to interview Michael Gerard Bauer, author of the brilliant and hilarious teen novels 'Don't Call Me Ishmael' and 'Ishmael and the Return of the Dugongs'. (Think along the lines of younger Australian In-Betweeners and you'll understand why these books have been such a hit with readers worldwide!)

Where did the inspiration from ‘Don’t Call Me Ishmael’ and ‘Ishmael and the Return of the Dugongs’ come from?

The whole thing started because of the famous first line of Herman Melville’s classic novel Moby Dick. I had a picture on my notice-board beside my desk, of a scene from the old movie featuring Gregory Peck as Captain Ahab. One day when I looked at it, I thought about that opening line and imagined someone – it seemed like a teenage boy - saying the opposite, ‘Don’t call me Ishmael’. That started me asking questions. Who is this boy called Ishmael? Why doesn’t he like his name? Why did his parents give him that name? What is his personality like? Three books came from that picture being on my wall and that very first simple thought. I’m constantly amazed how stories grow from such tiny seeds. And if I can mix in another metaphor, it’s a bit like finding one piece of a jigsaw puzzle and starting to wonder what might connect to it. If you’re lucky, sometimes a picture begins to form.

How do you make your characters ‘real’ so teens can relate to them?

I threaten them with violence! No, not really. I think being around teenagers all the years I was a teacher automatically helps a great deal in making the voice and personalities of the characters at least believable. All the boys in the story are based on ‘types’ of boys I’ve known and taught. A couple of them started off based on real people. And even though I haven’t been a teacher for a while now, I still visit lots of schools as an author. The other thing that helps me create young characters is probably a disturbing lack of maturity on my part.

Is it difficult to write for teen boys, particularly when they are more reluctant readers than girls?

It’s extremely difficult and I wouldn’t advise anyone else to even attempt to do it! Just leave it entirely to me. And if you are currently doing it, then stop immediately because it will only end in tears! Now that I’ve effectively eliminated all opposition, what I’d like to say is, that when I’m writing the Ishmael stories I don’t really have a specific target audience of teen boys in mind. My first audience is always me. (Luckily I’m a big fan!) I just try to write the stories that make me laugh or touch me or that show the way I see people and the world and the things I hold dear. If I can do that, then hopefully there will be other people out there like me. (A frightening thought I know.) In the end, I’d like to think that boys, girls and adults could all find something to enjoy in the books. The other thing I’d say is that in the battle to engage more reluctant readers, humour is a great ally to have. And I’ve always loved humour.

Will there be more tales of Ishmael’s high school disasters and capers in the future?

I’ve already written the third book of the series titled Ishmael and the Hoops of Steel. It covers the last two years of Ishmael’s life at St Daniel’s College and ends on Graduation night. Now that they have headed off into the big world, I think that will be the end of my writing about Ishmael, Razz and the gang. It was a bitter-sweet experience for me to complete their story. I’ve become very close to all the characters and they are very real to me. It will probably sound weird, but I had to brush away more than a few tears, while writing some of the final scenes for the last instalment.

Do you get any fans suggesting ideas for what Ishmael could get up to next?

I don’t get any fans, period! But some of the lovely people who have liked the series and followed it through to the end, have suggested a few things for a fourth book. Ishmael at University? The Razz Diaries? Ishmael – the Missing Journals? Ishmael - the Primary Years? Not sure about any of those ever happening, but if they did, then I could see The Razz Diaries making for interesting reading!

Are there any plans for the books to be turned into a TV series or film?

That would be a very exciting development. Nothing of that sort mentioned as yet, although in Australia there has been a stage production based on one of the books. My son Joe is a young film-maker (his horror/comedy film The Killage won Best in Festival at the 2011 Crystal Palace International Film Festival) so maybe we could keep it in the family. The only trouble is, as well as directing, acting, editing and doing the special effects, Joe also writes his own brilliant and funny scripts, so I might be waiting a long time!

Do you think ‘School days are the best days of your life’ (as the saying goes!)?

I hope not! It would be sad if everything was downhill from there. But I think they can be one of the great highlights and where you can form some fantastic friendships which can last a lifetime. To me that’s what the Ishmael stories are all about. Ishmael’s school days are not perfect by any means. They have triumphs and disasters, laughter and tears, joy and pain, but it’s his friendships that get him through and make everything worthwhile.

Do you have any projects in the pipeline you’d like to tell us about?

At present I’m writing a series of three humorous books for younger readers. The first one will come out here in Australia in November this year. The main character is in Grade 5. They will be illustrated with cartoons throughout and the really exciting thing for me is that my son Joe is the illustrator. Not only is he a great film-maker, he’s a great artist as well. He’s incredibly talented. It’s soooo annoying!

You can also find me on Facebook at: Michael Gerard Bauer Author.

'Don't Call Me Ishmael' and 'Ishmael and the Return of the Dugongs' are published by Templar Publishing in the UK and are available to buy from all good bookshops and online stores.

Check out our review of both books at www.bookapoet.co.uk/book_reviews/childrens_books/teens/

Email ThisBlogThis!Share to TwitterShare to FacebookShare to Pinterest
Labels: Don't Call Me Ishamel, Ishmael and the Return of the Dugongs, Michael Gerard Bauer, Templar Publishing