Our latest read: The Devil's Creature in the City of the Dead

Fancy a horror story this summer? This teen fiction will have your spine tingling! 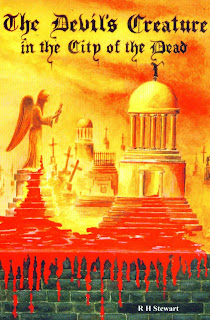 Initially I thought it was going to take a while for me to get into this book - the rich, descriptive language, and its very dark opening scene with flashbacks to the past, instantly showed me that this was a story that needed my undivided attention. Nevertheless, this is not a criticism - this fantastically detailed book makes you a compulsive reader - from the outset it promises to capture its readers, swallowing them up in an imaginary world where good and evil battle it out.

Set in Glasgow, the story is centred around Mhairi, a 14-year-old witch, who together with her black cat called Jet and her human companion Dougie, set out on a quest against a vampire, released into the world by the great and evil power Lord Antoninus. Along the way the team solve murders that are taking place all over the Necropolis (also called City of the Dead) as well as meeting ghosts and ghuls. Although quite violent in places, this is a richly imaginative and compelling fantasy story. A truly original horror tale that will scare both adults and teens!

Email ThisBlogThis!Share to TwitterShare to FacebookShare to Pinterest
Labels: r h stewart, teen fiction, the devil's creature in the city of the dead