Where did the inspiration for ‘My Hamster is a Genius’ come from?
To be honest, I’m not entirely sure.  I had a hamster when I was growing up, but he wasn’t so smart.

As a teacher, as well as writer, do you have a wealth of material to draw on when writing ‘Stinky and Jinks’ tales?
I’ve mostly taught adults and high school kids, so I suppose it’s more a case of drawing on my own experiences of being a kid.

If you could have an amazing pet like Stinky, what animal would it be and what unusual skill would it have?

How about a monkey that could baby-sit my kids, whilst performing song-and-dance numbers?  Like a simian Mary Poppins.

Stinky and Jinks have a blog – Stinky’s Family Tree blog post … will any of Stinky’s family appear in future editions?

I don’t think so – Stinky’s kind of unique, although there is a girl hamster slated to appear in a future adventure.
The next two books in the series, ‘My Hamster is an Astronaut’ and ‘My Hamster is a Spy’ are out in 2013 – do you have plans for any further Stinky and Jinks books?

Yes, lots!  I’m working on at least 4 more – including my favourite title so far, ‘My Hamster’s Got Talent!’

How was your book tour in the UK this September? Any highlights you’d like to share with us?

I had a great time.  It’s been a lot more fun and a lot less nerve-wracking than I expected.  It’s been great to hear from people who’ve read the book – kids, parents and teachers – and the response has been opverwhelmingly positive.  I got a VIP school dinner at Graiseley Primary School in Wolverhampton (extra potatoes, I think) – which was a highlight.  And the festivals at Bath and Cheltenham were fabulous – I got to meet some fantastic writers.

Do you have any top tips for budding writers?

I guess my advice would be: don’t say you want to be a writer, say you are a writer.  I was a writer for 20 years before I was published.  Have confidence, read a lot, write a lot, and don’t give up.

Do you have a special place you write?

I have a room at home but, really, I only need quiet.  (With two daughters aged 8 and 4, though, quiet isn’t always easy to come by!)

Do you have any projects in the pipeline you’d like to tell us about?
I’m working on a book aimed at older kids – a private eye novel.
Where can fans of you and your books find out more about you and your writing?
The sad fact is that my fictional hamster, Stinky, has more of an online presence than I do.  The publishers, Templar (who’ve been absolutely amazing) have given him his own blog: http://stinkyandjinks.blogspot.co.uk/ 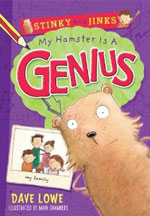 ‘Stinky and Jinks: My Hamster is a Genius’

This is the first Stinky and Jinks adventure and what a great one it is! Meet Benjamin Jinks – he’s always getting into trouble and his maths is lousy, his teacher is always on his case. Ben’s mum thinks if she gets Ben a pet, that will help teach him responsibility and improve his behaviour. Plus she’s locked all his games, TV and toys in the shed and he won’t get them back until he’s proved himself. Ben thought of all the pets he’s like and … the hamster his mum got him wasn’t on this list. An unimpressed Ben names his hamster ‘Jasper Stinkybottom’, just to be awkward.

Imagine Ben’s surprise, as he’s struggling with his homework, to hear a little voice telling him the answers. The little voice belongs to his hamster, who is now known as ‘Stinky’. Stinky does Jinks’ homework for him and his teacher is very suspicious. In fact his teacher and his dad have a bet, if Jinks doesn’t pass his next test in school he’ll have to clean his teacher’s car wearing a T-shirt saying he’s a cheat. This means one thing, Stinky has to go to school … cue mayhem and laughter all round!

This is an enjoyable book, funny, light-hearted, lots of great illustrations and slapstick moments readers are going to love!