In the world today, 6 billion 300 million people live.
If this world were shrunk to the size of a village,
What would it look like?

If 100 people lived in this village …

61 would be Asians,
13 Africans, 13 from North and South America,
12 Europeans, and the remaining one from the South Pacific.

33 would be Christians,
19 believe in Islam,
13 would be Hindus, and
6 would follow Buddhist teaching.
5 would believe that there are spirits in the trees and rocks and in all of nature,
24 would believe in other religions or no religion.
17 would speak Chinese,
9 English,
8 Hindi and Urdu,
6 Spanish, 6 Russian and 4 would speak Arabic.
That would account for half the village.
The other half would speak Bengal, Portuguese,
Indonesian, Japanese, German, French, or some other languages.

In such a village, with so many sorts of folks,
it would be very important to learn to understand people different from yourself,
and to accept others as they are.

But consider this
Of the 100 people in this village,
20 are undernourished,
1 is dying of starvation, while 15 are overweight.
Of the wealth in this village, 6 people own 59%,
- all of them from the U.S.A. -
74 people own 39%, and 20 people share the remaining 2%.
Of the energy of this village,
20 people consume 80%, and 80 people share the remaining 20%.
75 people have some supply of food and a place to shelter
from the wind and the rain, but 25 do not.
17 have no clean, safe water to drink.
If you have money in the bank, money in your wallet and spare change somewhere around the house,
you are among the richest 8.
If you have a car, you are among the richest 7.
Among the villagers, 1 has a college education, 2 have computers, 14 cannot read.
If you can speak and act according to your faith and your conscience without harassment, imprisonment, torture of death, then you are more fortunate than 48,
who can not.
If you do not live in fear of death by bombardment,
armed attack, landmines, or rape or kidnapping by armed groups,
then you are more fortunate than 20 who do.
In one year, 1 person in the village will die,
but in the same year, 2 babies will be born.
So that at the year’s end, the number of villagers will be 101.

Someone once said: ‘what you send out comes back to you again’.
So SING from bottom of your heart, DANCE with your body waving free,
and LIVE, putting your heart and soul into it.
And when you love, love as though you have never been wounded, even if you have.
And love the fact that you, and others, live here, in this village.
Perhaps, if enough of us learn to love our village
it may yet be possible to save it from the violence that is tearing it apart.

© Victor Richards 2012. All rights reserved.  Please do not use without the poet's permission. 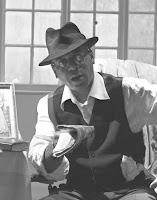 'Village of 100 People' is taken from Victor's one-man play 'I Spy Through the World's Eye'.

'I Spy Through the World’s Eye' is a performance about connecting people around the world. It is also a story reflective of today’s society and future generations. Opening the door and focussing on modern-day lives and current affairs, as well as drawing references from other cultures.

All of these plays are available from £300 plus travel expenses. All the plays are suitable for family viewing. Victor is based in Leceistershire but will travel wherever his shows are wanted! For further information, to book a show or to book Victor for a workshop or other event please contact info@bookapoet.co.uk.
Posted by Book aPoet at 22:17

Email ThisBlogThis!Share to TwitterShare to FacebookShare to Pinterest
Labels: featured poem, featured poem for may, If The World Were a Village of 100 People by Victor Richards