How do you fight back when your own heart tries to kill you?


A spoken word show about heart failure. But with jokes. Shortly to become a BBC radio 4 mini-series, broadcast in Autumn 2013. 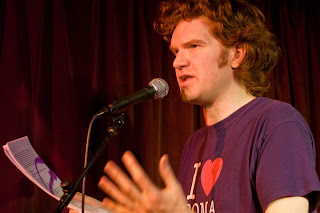 For his thirtieth birthday RTJ, the healthy, gym-going “Ringmaster of Spoken Word" (4 stars-ThreeWeeks) at Edinburgh's Free Fringe got an unexpected present: heart failure.


Now join him as he relives his perilous journey to the operating table and back again with his long-awaited, understandably-delayed debut solo show: a healthy prescription of cardiomyopoetry, (re)animation and anecdosage, not just for spoken word fans but for anyone who has a heart. Or failure ...

"masterfully manages the listeners' mood as it oscillates between laughter and despair... It is a big-hearted show, and a valuable lesson in making the most of whatever life throws at you. Highly recommended." - Fringe Guru

"This show was the most thought-provoking I have seen this year at the Fringe... touching yet funny, gruesome yet poetic, informative yet uplifting." -  Buxton Fringe


Big Heart has opened Peterborough Arts Festival, received a 'Best spoken word show' nomination at the Buxton Fringe, as well as appearing at the Camden Fringe, been recommended in the Ham & High, New Yorker and Time Out. At the 2012 Edinburgh Fringe Richard won ThreeWeeks magazine's Editor's Choice award. September 2013 will see the show at the Vancouver Fringe.


“Well worth an hour of your time, this is a curiously life-affirming show from a charismatic and likeable performer.”- The Skinny.


In 2012, Richard won support from Wellcome Trust to develop the show with audio-visuals and organise a UK tour taking in Liverpool's Disability Arts festival, Canterbury Festival and collaboration with local live spoken word, comedy and science promoters. Big Heart also has support from the Cardiomyopathy Association, for whom Richard has raised £700+ at gigs.


Show duration: 55 minutes but can be expanded or contracted to suit.
Technical requirements: Room for our own screen, projector, sound and studio-size stage preferable, but can be adapted to suit.
Show style: Accessible poetry linked by amusing true-life narrative and scientific explanation. Only one swear word but still not recommended for children or the very squeamish.

“a refreshing innovation in the spoken word scene... a testament to how far we can all recover from even the darkest diagnoses.” - broadwaybaby.com


Supporting workshops: Richard is an experienced and CRB-checked (1320279696) workshop leader who has worked with adult writing groups, vulnerable adults, museums, universities and schools. He was a poet on Apples & Snakes' Shake the Dust schools slam project and recently provided live interactive art for the Wellcome Collection (blog here).


He has a variety of workshops including those themed around illness and tackling other life problems which can follow on from a performance  of the show in your school, or offer cut-price tickets. Richard is based in London, but will travel across the UK and beyond.


"His manner of storytelling is engaging and compassionate. In many ways he is like a doctor with patients, explaining complex medical terms and experiences of trauma to a lay audience... I left feeling uplifted and inspired by a tale of such optimism in the face of death." - On the Fringe


"Stories about heart failure shouldn't be this cheering. An engrossing tale with rousing poetry." - fringebiscuit.


"I would have been mortified to have missed a second of this thoroughly engaging show... not only a magical use of the English language but the performance and presentation skills of an accomplished stage actor... I urge you to see this show!" - remotegoat.

If you are interested in booking Richard Tyrone Jones' Big Heart spoken word show or would like further information, please email info@bookapoet.co.uk.

You can purchase Richard's poetry collection 'Germline' from Amazon.
Posted by Book aPoet at 10:06